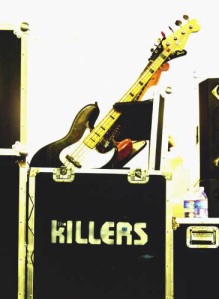 Truth be told, when I decided to spend an asinine amount of money on two tickets to see the still semi popular band from sin city, The Killers, it was only because I needed a Valentine’s Day gift.  While I liked a handful of tracks from their first two releases, I shrugged at their third release, Sawdust, and had blown off the first two singles from their newest album, Day and Age.  While “Spaceman” is a head bobber and a bit of a leg shaker, the first single, “Human,” has lyrics that can only be described as laughable. I mean, “Are we human. Or are we dancer.” What in the sam hell is that supposed to mean? Another detractor was the fact that the show was to be played at The Eagles Ballroom. Anybody that has ever been there knows that it’s A) one of the worst rooms in Milwaukee to hear live music B) beverages are often warm and overpriced (beer is $7.50 & WATER is $2.00) and C) the place sweats more than a fat kid in Florida in August. (Trust me on this one) So, again, I was going to this show because “All These Things That I’ve Done” dominates EVERY workout playlist I’ve ever put together and more importantly, my wife has been dying to see them ever since she gushed over Hot Fuss and glued her eyes to Brandon Flowers donning a pink suit on SNL.

It has now been over a week since the show and I am still somewhat amazed at how great it was.  Minus witnessing multiple women throwing up in a gargage can not ten feet away, the sights and sounds were some of the best that I have ever seen and heard in that shit box.  Overall it kind of felt like I was living the Ben Folds song “Zak and Sara.”  “I saw the lights, I saw a pale English face, some strange machine repeating beats and thumping bass, visions of pills that put you in a loving trance, that make it possible for all white boys to dance.”  It was bar none the largest production that I have ever seen in that building.  The usual basic and bare backdrop was exchanged for a Vegas show stage backlit by thousands of bright white bulbs.  Bright pink, purple and blue lights snaked around the crowd, obliterated the stage, and added an awesome visual dimension that was very welcomed by this reviewer.

All I can say about the sounds is that it was impossible knowing or not knowing the songs, the words being audible or inaudible, to not bounce along to nearly every note they played.  I found that live, The Killers music is better, more energetic and more infectious than the Swine Flu at an elementary school lunch table (sorry, it was the day news broke).  Infectious was also the fun that front man Brandon Flowers was clearly having as he moved around the stage like a sprite singing everyone’s favorite songs and melting the crowds hearts by telling them multiple times that it had been way too long since they played Milwaukee.  As good as the entire show was, they TKO’d me as they closed the set with the 1-2-3 punch that was “Read My Mind,”  “Mr. Brightside,” and “All These Things That I’ve Done.”  It was one of those smiling wtf moments.  A welcomed cluster fu@# where you are in utter amazement that they are playing all of the songs you like in a row.

NOTE TO SELF: See The Killers whenever they are within a comfortable driving distance.